Board Games and Card Games for Preschool Engagement

One of the reasons we have embraced board gaming is because of how adaptable it is to whole-family, multi-generational interaction. Granted we haven’t figured out a way to involve the eighteen-month-old in board gaming in a meaningful way (i.e. chewing on game components doesn’t count and is a cardinal sin in our household!).  But we’ve been surprised at how early little people can participate in a way that feels like participation and not just “go over there and play with blocks while we board game”.

Want to know how to involve your 3- to 5-year-old children in family board gaming?  Here are just a few suggestions:

Perhaps when you think of little-people games, you think of games like Chutes and Ladders or Candy Land.  And perhaps that brings to mind cheerful images of you checking Facebook on your phone while saying to your preschooler “Go ahead and take my turn for me, honey,” glancing over only frequently enough to discern how much longer you will have to wait until the game is over.  These games fail to engage because they do not involve any interaction or decision-making – they are 100% based on random chance.

Parents and game designers design 100% random games for preschoolers this eliminates decision-making and “levels the playing field” amongst older and younger players.  But removing choice also makes games less engaging, especially for older players. Can it actually be called a “game” when you are really only watching it play itself out, rather than actually playing it?  So, what kinds of games can littles play and adults (or older siblings) enjoy, too?

Memory games still involve plenty of choices, while also playing to the strength of preschoolers.  Begin with a traditional memory game that involves a simple layout of cards or wooden tiles flipped over one pair at a time to find matches.  Begin slowly, using only 5-8 pairs of matching and work your way up. 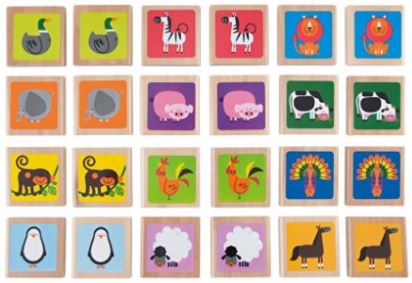 The simplest matching games involve matching identical pictures and come in all themes, such as fairy tales

There are also several adaptations on the basic concept of the memory game.  Dominoes

are essentially a two-part matching game and also introduce the concept of holding onto a “hand” of “cards”!  (My daughter Hazel is pictured playing Dominoes with my Grannie in the title graphic shortly before her third birthday!) 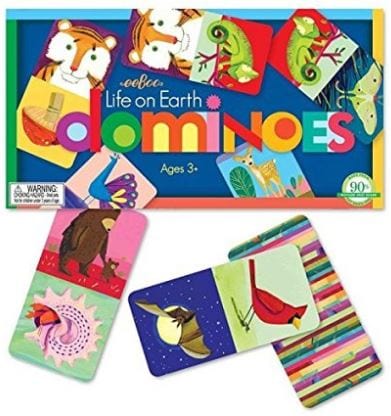 Dwarves and Dice, a German game,

involves rolling three dice marked with colored circles and matching the three colors with the outfits on the dwarf cards.  My children have enjoyed this game through and beyond the preschool years! 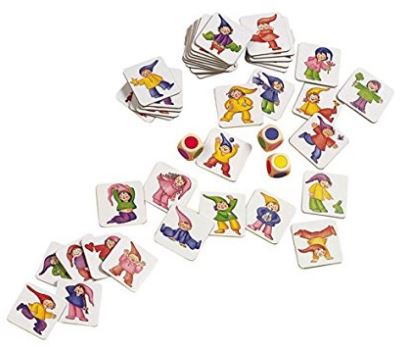 And finally, one of the best adaptations of the matching concept is Ravensburger’s Enchanted Forest

.  Fairytale symbols are hidden on the underside of plastic trees placed randomly around the playing board, so every game is different.  Players travel around the board, discovering and memorizing the locations of each treasure, so they can tell the king where to find them!  I have actually known some adults (ahem!) to choose to play this game after the kids are in bed! 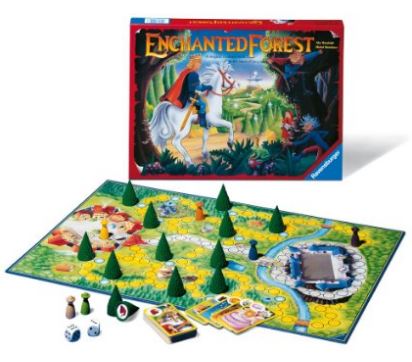 Nimble little fingers can sometimes outplay bigger ones in simple dexterity games!  Here are some of our favorites, to give you an idea of the wide variation of dexterity games available!

by Haba is similar to pick-up sticks but much simpler for the smallest gamers.  (If you want to see it played, you can watch a Periscope I did with Hazel here!) 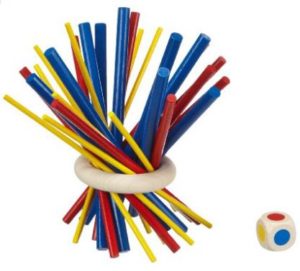 , also by Haba involves dice rolling.  Roll the die to select a wooden animal to stackon the tall, teetering 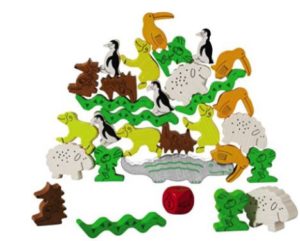 is a card-stacking game.  Players take turns stacking sturdy folded cards according to visual clues and directions and then moving the wooden rhino from floor to floor! 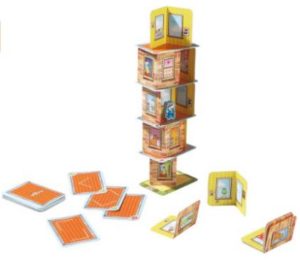 Even if you are playing a family game, the strategizing or decision-making making may still be beyond the abilities of your preschooler.  But a little person can be on a team with an older person and still participate in meaningful ways.  Begin simple and increase in complexity so that you can ease your kiddos into being self-sufficient game opponents!

The more you game with your children the more adept you will become at anticipating how the unique abilities and developmental level of each child will interact with a game and how to make adaptations so that more kiddos can play. Oh, and sometimes the three-year-old will just want to go play blocks instead of sitting with you.  That is OK, too!

What games does your preschooler enjoy?  We’re always in the market for new suggestions!